Many would argue that aesthetics would outlive everything. All cars eventually become old and obsolete in terms of technical specs, except high-achievers, such as the McLaren F1 or Bugatti Chiron SS. The point is, eventually, aesthetics become the main definitive characteristic for most cars, and this is what people will remember. Some cars, however, are just weird, like the Alfa Romeo SZ/RZ we recently covered. then you’ve got cars like the Castagna Vittoria, which is named after the synonymous coachbuilder from Milan, that is just as weird and even more obscure.

Carrozzeria Castagna can be traced back to 1849 when Carlo Castagna bought the Ferrari coachbuilding business. The company boasts the first coach automobile equipped with a combustion engine – the Benz quadricycle. The coachbuilding company worked with various big manufacturers and among its highlights are cars like the 1913 Alfa Romeo 40/60 HP Aerodinamica, 1928 Isotta Franscini Castagna Imperial Landaulet, 1933 Lancia Astura S2 Aerodinamica, and the 1939 Alfa Romeo 6C Castagna Berlinetta. In 1954, however, the company ceased operations.

The Rebirth of Carrozzeria Castagna

In 1994, the company was bought by businessman Uberto Petra and Gioacchino Acampora – an Italian automotive designer. His first project in the resurrected Carrozzeria Castagna was the 1995 Alfa Romeo Vittoria. It was essentially a re-bodied Alfa Romeo SZ, of which 1,036 were made (and 284 RZ - convertibles). The Vittoria was unveiled at the 1995 Geneva Motor Show. Uberto Petra financed the project, Gioacchino Acampora designed it, and Petro’s daughter named the car after herself.

The SZ, and consequently the Vittoria, was based on the Alfa Romeo 75 in terms of mechanics and the engine. However, the 3.0-liter Busso V-6 was tuned to 320 horsepower at 7,000 RPM and around 260 pound-feet (352 Nm), as opposed to the 75’s 180-horsepower output and (207 horsepower for SZ/RZ). However, the car was dynoed at just under 254.8 horsepower at 5,740 RPM. The engine still retained a single-overhead-cam design. Power was sent to the rear through a five-speed manual.

Like the SZ, the Vittoria’s most distinctive feature is the design. The front in particular features a “beak” and the front bumper seems to be tucked in under the headlights. The entire lower fascia is blacked out and it almost seems like part of the front between the splitter and headlights is missing.

On the side, you’ll notice how the lower half features an interpretation of the wedge design, while the upper part is much more rounded. The doors look very similar to what we see on the much newer Alfa Romeo 8C.

Just like the front, Vittoria’s rear is mostly blacked out and features thin taillights. In modern days, we see a similar design on the Lamborghini Aventador, although with different proportions.

The interior was very similar to the Alfa Romeo SZ/RZ. However, it was finished in green leather and Alcantara, and had wood inserts on the dashboard, making it a bit more upscale.

Vittoria was actually the second project of designer Gioacchino Acampora that came from the resurrected Carrozzeria Castagna. The first project was called Castagna Auge. It also came in 1995 and was based on the Maserati 3200 GT. A revised version of the car was displayed at the 2002 Villa d’Este 2002 Concours d’Elegance where it won the "Best in Show" award.

What happened to the Vittoria? 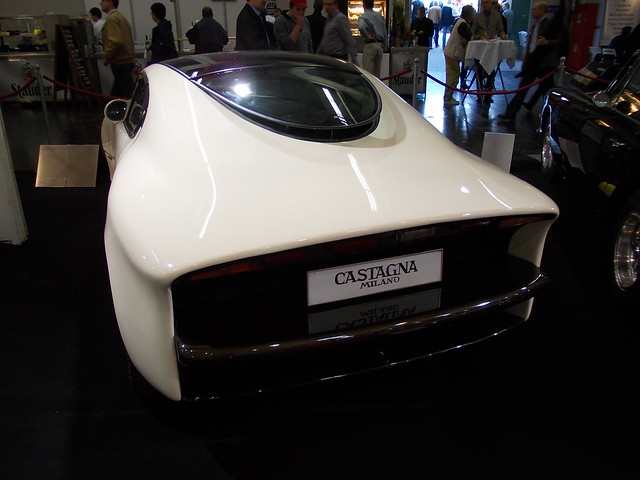 After its unveiling in 1995, the Alfa Romeo Vittoria was used by its designer as a personal car. Reports indicate that the car spent the majority of its lifespan in Milan. In 2010, it was fully restored, and attended various events and exhibitions.

The latest updates regarding Vittoria indicate that it was heading to the auction block, where it is expected to fetch the equivalent of around $238,000.

As for Carrozzeria Castagna...

The coachbuilding company continued bringing out interesting projects, like the 2003 Castagna Rossellini and 2005 Castagna Aria, based on the Ferrari 550 and 575M respectively. Other projects include a 2003 Bentley Continental GT Shooting Brake, the 2007 Castagna Aznom, based on a C6 Corvette, and their latest project - the 2020 Castagna Palladium - an all-terrain "hyper limousine" based on the Dodge RAM.