Alfa Romeo FNM Onca: The Italian Ford Mustang You Did Not Know About

Usually, cars have little to do with the military, but the obscure coupe, known as the 1966 Alfa Romeo FNM Onca is a bit different. In addition to being one of the most obscure and out-of-character cars, wearing the Alfa Romeo badge, the FNM Onca has an interesting story behind it.

Even before World War 2 ended, Alfa Romeo’s global business contracts were strong. A few Alfa Rome models were built under license, in countries outside of Europe, among which Argentina, Malaysia, Thailand, South Africa, and Brazil.

In 1942, a new factory was opened in Rio de Janeiro. It was called Fabrica Nacional de Motores (FNM) and was founded by general Edmundo Soares and Brigadier General Antonio Muniz. The factory started the production of aeronautical engines, ammunition, refrigerators, spindles, and bicycles.

While FNM’s portfolio may seem a bit random, in 1949 the company struck a deal with Isotta Francini to produce its trucks. The truck manufacturer went bankrupt just two years later, in 1951, which prompted FNM to look for a new partner.

That partner was Alfa Romeo, which allowed FNM to start producing Alfa Romeo trucks under license. Eventually, their partnership extended to light vehicles, and the first Alfa Romeo car, built in the FNM factory, was the FNM-2000 Modelo JK, which was an Alfa Romeo Demila (2000) Berlina, built under license. JK actually stood for Juscelino Kubitschek, at the time, president of Brazil.

The Alfa Romeo FNM Onca looked like a 1966 Ford Mustang

While the FNM Onca’s mechanicals came from the FNM 2000, the fiberglass body was completely handcrafted. Responsible for FNM Onca’s styling was designer and entrepreneur, Genaro “Rino” Malzoni, who also created the GT Malzoni and Cougar. All Onca bodies were built in Malzoni’s workshop, in Matao City, Sao Paolo, while the mechanicals were assembled in Xerem, Rio de Janeiro.

The car bore striking resemblance to the American Ford Mustang that debuted 2 years earlier, in 1964. Of course, the proportions were a bit different, as the FNM Onca was noticeably smaller, and had a shorter wheelbase. Strangely enough, the FNM Onca shares almost all of its design with the Mustang. The roofline, beltline, and even lower side profile are almost indistinguishable from the American pony car.

Of course, the car featured its own taillights and the front fascia was somewhat reminiscing of the original Alfa Romeo Giulia. Also, Alfa Romeo FNM Onca’s fuel cap is on the right rear quarter-panel instead of in the middle of the rear, like on the Mustang. The prototype, shown at the 1966 Brazil Auto Show had quad headlights, while the production versions had just two round pieces.

Performance was not overlooked 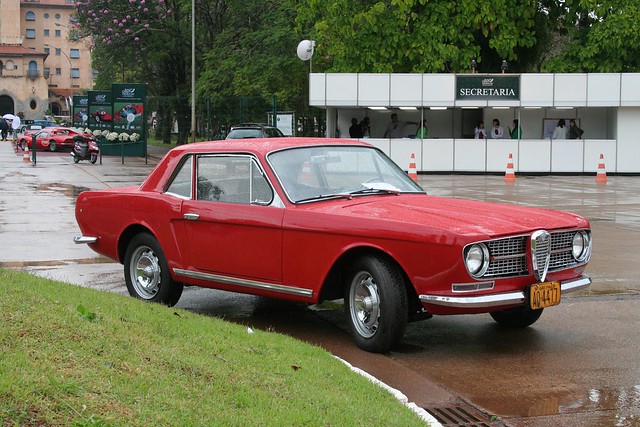 It may look like a Ford Mustang, but don’t expect a 289 cubic-inch (4.7-liter) Ford V-8 under the Onca’s hood. That said, the “Alfastang” was powered by a 2.0-liter inline-four petrol engine, with twin-Weber carburetors, rated at 115 to 131 horsepower and 123 pound-feet (167 Nm). Power was sent to the rear wheels through a five-speed manual. It is believed that the lower horsepower figure is for an automatic version, but the existence of an automatic version has not been confirmed.

To be more specific, tthe FNM Onca was named after the biggest cat of the Panther family, as explained in an Alfa Romeo forum. In Portuguese (it’s the official language in Brazil), Onca means Jaguar. An appropriate name, given that the big cat can be a common sight in many regions of Brazil.

One of the weirdest test drives in history

Apparently, the front wings were channeling air into the air pillars, which made its way into the roof of the car, causing the roof lining to tear itself, at a speed of 100 mph (161 km/h).

This is a rough translation, from Portugiese, which describes in detail what had occurred during the test drive: “Passing the entrance building, Barone stopped at the beginning of the straight and kilometer lane that connects the factory to the Petrópolis-Rio road, called the engine to the lines, used the whip and released the reins. The Pirelli Cinturato 175x80x400 skidded, the swirling gases passing through the hemispherical chambers, in a cross-flow, in the intake-burning-exhaust cycle, was the Alfa’s auditory signature, and translated the engine’s satisfaction in moving something lighter, more compatible with your vocation. First at 5,000 rpm, quick shift, second speed synchronizer protest, slight slippage, cardan shaft elastic joints compressed. At 5,700 rpm, in third, throttle at full throttle, the roar of gases was still present. At a hundred miles an hour, suddenly, there was a noise and everything went black: overhead, a quick noise of something being ripped off. The roof lining came off and fell on the occupants like a wide, empty airbag. Barone managed to stop the car in a straight line. Scared, but no harm done.”

Very few examples of the FNM Onca were made

With a hand-crafted body, the Onca was never going to be a mass-produced car, despite the good receptions at the 1966 Brazilian Auto Show. The FNM Onca was made without the knowledge of Alfa Romeo, which didn’t help either. All in all, the total production run was five cars. Of those five, only three still exist, and according to a 2019 Jalopnik article, one is being restored by a man named Ricardo Oppi, in Brazil.