We have said many times that Lamborghini Countach is a car that deserves to make a comeback. Lamborghini proudly celebrated the 50th anniversary of the Countach, by launching a series about the model‘s history. The original Countach was produced for 16 years, and now that the automaker is reviving the legendary model, it’s worth revisiting all versions of the original car, including some of the very obscure ones.

This was the very first incarnation of the original Countach. It was followed by two more pre-production versions before the actual production car. The LP500 prototype was unveiled at the 1971 Geneva Motor Show and was built on a partial spaceframe steel chassis, as opposed to the production car’s full tubular spaceframe. The car was originally equipped with a new 5.0-liter V-12 engine, which produced 440 horsepower at 7,500 RPM 367 pound-feet (497 Nm) at 5,000 RPM. The engine was later destroyed during testing.

The destroyed powerplant was replaced by a version of the 3.9-liter V-12. The first prototype was eventually destroyed in a crash test at the MIRA facility in England, in order to comply with European safety regulations. 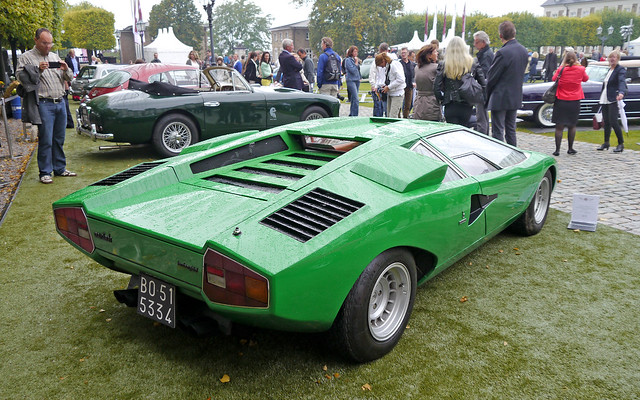 The second prototype was unveiled at the 1973 Geneva Motor Show, painted in red. Later, it was painted green and shown at the 1973 Paris Motor Show. The car currently sits in the Lamborghini museum in Sant’Agata, Bolognese.

The third prototype is considered by many to be the first pre-production version. The car was built according to the LP400’s production specifications. The body was 5.1 inches (13 cm) longer than the previous prototypes, in order to create a more usable interior. The chassis and mounting points were beefed up, while the body panels were thicker than previous versions of the car. Due to reliability and packaging reasons, Lamborghini gave up on the 5.0-liter V-12.

The first and most sought-after production version was the LP400, with only 152 examples being built.

Apparently, if you are rich enough you can have a car named after you. Who knew? In 1975, a rich Canadian businessman was not satisfied with the performance of his Lamborghini Countach LP400. Gianpaolo Dallara – at the time Lamborghini’s chief engineer – was tasked with enhancing the car with chassis No. 1120148. He did so by putting a 5.0-liter V-12 engine, identical to the one in the original 1971 LP500 prototype.

The special request led to two more identical cars being produced – a light “Bugatti” blue and a darker navy blue car, equipped with the same 5.0-liter V-12 engine. The latter of the two was introduced at the 1978 Geneva Motor Show.

In 1976, three additional LP400 were built per special requests. One of the cars was for Walter Wolf – chassis No. 120202. The other two were commissioned by Ermanno Spazzapan –chassis No.1120188 – and Albert Silvera – chassis No.1120222. Each of the three cars received a special 5.0-liter unit like the one in the 1975 Lamborghini Countach Walter Wolf Special. All three cars were also heavily customized

The model’s first update came in 1978, in the form of the LP400 S. A redesigned exterior now featured a big rear wing (optional) and flared fenders. The latter was to accommodate the widest tires ever fitted to the Countach – 13.5 inches (345 mm) width. Because of the big, V-shaped, rear wing, the top speed was reduced to 171 mph (275 km/h), while the 0 to 60 mph time was around 5.9 seconds.

This meant 0 to 60 mph (97 km/h) was now possible in around 5.2 seconds, while the top speed was 182 mph (293 km/h). The first 20 cars featured Campagnolo wheels, while the rest were equipped with wheels made by Ozetto in electron. The U.S. version of the car was called the LP5000 S because having more zeroes is always cooler, right? A total of 323 cars were made.

At this time, the Countach went through a significant update. The “QV” stood for “quattrovalvole”. This meant that the V-12 now had four valves per cylinder. In addition, the engine now had 5.2 liters of displacement and new downdraft carburetors. The car gained a lot of performance. It now produced 455 horsepower at 7,000 RPM and 369 pound-feet (500 Nm) at 5,200 RPM.

This was a project for Group C Racing, which utilized a bespoke chassis built by Spice Engineering and CC Engineering. It also used a 5.7-liter version of Lamborghini’s V-12, built by Luigi Marmiroli who used data from Lamborghini’s main engineers. Depending on the setup, the engine was said to produce anywhere between 650 and 700 horsepower. The gearbox was a VG-C racing transmission.

The car was actually commissioned by David Jolliffe and was entered in the 1985 LeMans season. The car was entered again in 1986, but after the funding ran out, it was retired. Despite not having much racing success, the Countach QVX managed to keep pace with seasoned manufacturers.

Towards the end of 1986, a very different version of the Countach was introduced. It featured a heavily redesigned body with a deep chin spoiler and an integrated rear spoiler. The car also featured different side skirts, which were flush with the flared wheel arches, as well as new air intakes for better brake and engine cooling. The doors were slightly altered to allow for full-size side windows.

Development of the L150 started in 1984 after Giulio Alfieri decided he could optimize the Countach. The main goal was to address some design disadvantages of the production car, like the drag coefficient. To improve that new rocker panels were designed, which seamlessly joined the front and rear wheel wells. Some of the edges of the car were smoothened out and the air scoops behind the rear windows were redesigned. Some of the cooling ducts now resembled those of the 1971 prototype.

The NACA ducts were replaced with large side grilles and the side windows were redesigned. The front spoiler was also redesigned and was now flush with the rest of the front fascia. Despite extensive improvements, the engine and suspension were left untouched. The sole prototype was based on a European-spec 5000QV, which meant a carburetted 5.2-liter V-12 with 455 horsepower and 369 pound-feet (500 Nm).

This version was heavily influenced by Horacio Pagani and the newly formed, back then, Composites department. The car was a testbed for future technologies that would make their way into the Countach successor. In fact, many design solutions will later transition into the Countach 25th Anniversary and the Diablo.

The car featured body panels made from Kevlar and carbon fiber, reinforced plastic, and aluminum honeycomb panels. In addition, the prototype was slightly lower than the production Countach. The chassis was completely new as well. The biggest change, however, was the chassis. The tubular steel frame was replaced by a composite unibody structure.

The result was a car 876 pounds (397 kg) lighter than the production version. At the same time, the prototype featured an all-wheel-drive, ABS, adaptive suspension, and a low-drag, retractable windshield wiper.

The single prototype was destroyed in crash testing.

To celebrate 25 years of Lamborghini cars, Lamborghini made the Countach 25th Anniversary. It was based on the 5000QV, which meant it used the exact same 5.2-liter V-12, with 455 horsepower and 369 pound-feet (500 Nm). The most distinctive feature of this version is the revised body, designed by Horacio Pagani, at the time working for Lamborghini.

The car had bigger spoilers and a lot more vents, compared to the 5000QV. In terms of craziness, the 25th Anniversary’s styling rivaled even something you would expect from high-end tuners like Strosek, Koenig, or Gemballa. The 25th Anniversary was the swan song of the Countach. It was succeeded by the Lamborghini Diablo, in 1990.