Porsche is a brand with enormous history, significance, and racing pedigree. Needless to say, their cars don’t deserve much of an introduction, simply because of the cult status they’ve achieved. This, of course, extends to their mainstream models and, more often than not, their respective limited editions. With that being said, there are some Porsche projects that, for one reason or another, did not come to fruition or simply remained in obscurity. This is exactly the case with the below-mentioned cars.

If you thought the Porsche Panamera was the brand’s first attempt at a four-door sedan, you would be wrong. In 1988, Porsche was feeling confident with their deviation to more luxury-oriented vehicles that was started by the front-engine 928. Because of this, that same year, they started developing the 989.

It was supposed to be “a Porsche for four” while resembling the iconic 911.

The 989’s production heavily depended on the success of the 928, the sales figures of which started to decline rapidly at this point. This led to the development of the 989 being halted in late 1991 and eventually being completely scrapped, in January 1992. As of 2019, the 989 is on display in Petersen Auto Museum in Los Angeles. Some design cues, like the taillights, found their way into the Porsche 996.

Read our full review on the Porsche 989

The Porsche 928 had many versions, but what you probably didn’t know is that the brand made two attempts at making a shooting brake version of the car. The first attempt came in 1984 and is also known as 942 ‘Viersitzer” (four-seater). It featured an extended roofline in order to accommodate tall passengers in the second-row seats.

In 1986, Porsche, together with AMG, made a couple of long-wheelbase cars. This led to the 1987 Porsche 928-4, which now had the normal 928 headlights and, more importantly, rear suicide doors that opened like the ones on a Mazda RX-8 and Toyota FJ Cruiser.

One of these cars is displayed at the Porsche museum, in Stuttgart. As for the first prototype, the structure was deemed too soft to enter production and the car was given to Ferry Porsche as a present for his 75th birthday.

In 1969, Porsche decided to fit their 911 with a full-size rear seat. They took a standard 911 and commissioned Pininfarina to stretch it by about eight inches (20.3 cm) and make it able to comfortably seat passengers of average height. What resulted was a 2+2 coupe with a hunched back.

Management was not happy with the design of the car (and yet, they let the first-generation Panamera slide) and, as a result, the car lives only in the automotive archives.

Porsche has been experimenting quite a bit with the 911 formula, even stretching it (literally) at one point. After the Pininfarina-designed B17 concept, Porsche decided to come up with their own longer version of the 911. Sadly, not much is known about this prototype from 1970, other than it’s based on the Porsche 911S with a 2.2-liter flat-six with 125 horsepower.

Some notable features were the external oil filler cap and front-mounted oil-cooler (like on the 2.7 RS). It is believed that the XLWB version is at least 20.3 cm (8 inches) longer than the standard car. Just like its predecessor, the B17, it never came to fruition, but had it succeeded, it would have been called the Porsche 915.

The first Porsche 911 Cabriolet came in 1983, right before production of the 911 SC was ended. However, there was a much older concept of a 911 Convertible that never entered production. It was shown at the 1964 Paris Auto Show and showed what a soft-top 911 Convertible might look like, should Porsche decide to make one.

Actually, the one-off prototype started life as a 911 Targa, but at some point, Porsche engineers wanted to test the rigidity of the 901’s chassis sans roof. In order to do that they simply hacked off the roll hoop of the Targa. Karmann was responsible for the 901 Cabriolet, since they’ve already been working on 356 drop-tops for some time. A total of two 901 Convertibles were made.

In the 1980s, Seat contracted the financially struggling German carmaker to build four-cylinder engines for the Ibiza, Malaga, and Ronda.

For one reason or another, the project was not realized with SEAT. That said, Porsche did not give up on the mid-engine car and proceeded with the development.

Eventually, they came up with their own design, heavily influenced by the 928, and called it the 984 Junior.

The dashboard was taken straight of a late 944.

The 984 Junior received four-wheel-drive and an air-cooled 2.0-liter flat-four with up to 150 horsepower (110 kilowatts), mounted behind the rear axle. Due to economically challenging times, the car was never produced, but it eventually led to the Boxter – one of the models that saved Porsche from bankruptcy.

Another car that didn’t come to life due to the economic situation in the 1980s was the Porsche 965 – not to be mistaken with the 964 Turbo S. It may look like the “money is no object” 959, but it was actually an exercise of cost-efficiency. It was supposed to be rear-wheel-drive only and would have a water-cooled Audi V-8. The car was actually developed alongside the cheaper 964 and was supposed to sit above it, but below the flagship 959.

Other than the Audi-derived V-8, which was potentially the same engine found in the 989, a couple of other engines were considered. Among them were a 3.5-liter unit, initially intended for the 959, a turbocharged V-6 (yes, really), and Hanz Mezger’s Indy racing V-8. 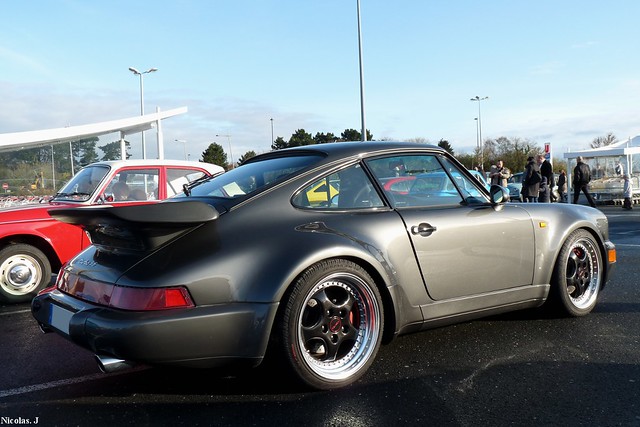 Sadly, Porsche couldn’t make the 965 affordable enough, without compromising on the quality, which led to the project being canceled.

In the mid-1990s, the Chinese government invited various manufacturers to work on a new range of cars. In response to that, Porsche came up with their idea of an affordable family car – the C88. The car was completed in just four months and did not feature any Porsche badging (who can blame them).

Among the interesting “quirks and features” was the addition of only one child seat, which reflected the Chinese population control policy.

The name was not chosen randomly, as “C” stood for China and “88” symbolizes good luck and fortune in Chinese culture. If you want to go at high speeds, however, then “good luck”. The car was equipped with a 1.1-liter naturally-aspirated inline-four, producing from 48 to 68 horsepower, mated to a four-speed automatic. This allows for a 0 to 62 mph (100 km/h) “sprint” of 16.0 seconds and a top speed of 100 mph (161 km/h).

Under the same initiative, Porsche also worked on a three-door hatchback. The C88 was supposed to have a pick-up and station-wagon version, but only the sedan was made in full scale. The C88 is a one-off and is displayed in the Porsche museum in Stuttgart.

In 1953, Porsche came up with a prototype light military vehicle. Its purpose was to replace the WW2 "Kübelwagen", built on the early VW Beetle platform. “Jagdwagen” roughly translates to “hunting car”. As with other Porsche vehicles, the engine was in the rear of the car. The prototype had a 1.5-liter air-cooled flat-four, while the production version (1955-1958) had a 1.6-liter air-cooled flat-four. The prototype weighed 2,183 pounds (990 kg), while the production version – 2,403 pounds (1,090 kg).

The Porsche 597 never went to serve as an army vehicle. The DKW Munga was chosen over it, for economic reasons.

The lack of doors was partially made up for by the high sills. The body of the car was built by Porsche’s own Stuttgart body works and was later strengthened by the coachbuilder Karmann.

The car’s body was also buoyant, which made the Porsche 597 “Jagdwagen” amphibious. Later versions of the car had doors and a slightly different design. The car was supposed to have a second version in 1959, but that never happened.